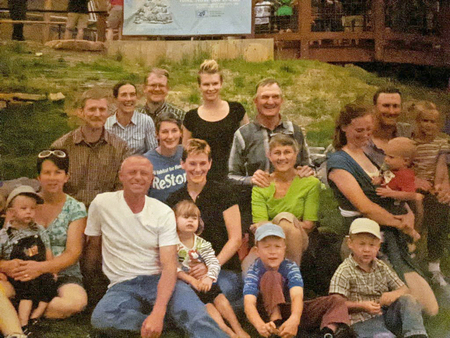 Marshall and Janice Karges were not convinced homeschooling was for them. Marshall was a bit more open to the idea, having had a sister who was homeschooling as a missionary family overseas. Janice was somewhat more hesitant to take the plunge, but after her oldest daughter was diagnosed with a severe milk allergy, the idea became more appealing. In addition, because the family lived in a very rural area, the thought of the long hours their daughter would spend on the bus to and from school every day made the decision even easier for them.

At the time they made their decision, homeschooling in North Dakota was not legal, but the battles were well underway. Janice states, “They thought we could not give our children a quality education, but we knew we could.” The Karges’ first became involved with homeschooling legislation in 1985. That legislative session, a bill passed the house and then went on to the senate. The small homeschooling community grew excited because they were told they had the votes to pass the bill in the senate as well. However, the vote in the senate was delayed until the day of the state superintendent’s meeting at the Capitol. The day of the vote, every senator had their district’s school superintendent sitting next to them. Needless to say, the bill failed that year.

Throughout this time, the Karges family watched while other homeschooling families fought legal battles to continue homeschooling their children, but had not faced any charges themselves. That changed in the fall of 1988 when a new school superintendent took over in their school district and decided to serve papers against them informing them they were not in compliance with compulsory education law. The Karges’ immediately called HSLDA, who took up the fight for them. Their attorney, Greg Lange, got the school to agree to wait to file charges until after the next legislative session in 1989, as they were fairly convinced they could get a homeschool law passed. This indeed did happen, and the charges against them were dropped.

Looking back, Janice is thankful for the decision they made to homeschool all six of their children throughout all of their school years. She relates that she had to be very structured in her school days because they were a large, farming family. At one point, she realized it would be impossible to teach each of their children every single thing they would ever need to know. A better approach became teaching her children how to learn for themselves. This approach evidently paid off. Their oldest daughter Heidi is college educated, married and homeschooling her own children. Their next oldest twin daughters, Tami and Christi, both have degrees (in veterinary medicine and music performance, respectively). Both are married and Tammy homeschools her daughter. Their son, Daryn, has a farm and ranch operation and is married. They are homeschooling their children, with one in the public school system. Misty is their next oldest daughter, who is married and living in Denver, Colorado with a degree in Textile Design. They are expecting their first child. Annette is the youngest of the family. She has a master’s degree in Piano pedagogy and teaches private piano lessons.

Janice believes that the opposition they faced because of homeschooling led them to be more diligent and intent on giving their children a quality education. She wishes her children could have had more peer interactions (living in such a rural area decreased their opportunities for this). However, she relates that her daughter once told her in college, after having listened to some of the social issues her friends had gone through in junior high and high school, that she was so thankful she was homeschooled and did not have to experience those same things.